I have spent the last week contemplating resolutions plans for the new year.  Yes, I have made resolutions before, only to fall back into the same pattern within a few months or sometimes even weeks.  The tree and Christmas decorations are put away, but life can't go back to what normal was a month ago.  This year is brand new and exciting.  This excitement cannot diminish in a few weeks or months.  Not this year.  And because of this, there will be no resolutions.

One year, I did the One Little Word creative thing, but in typical me fashion, I stopped by the sixth month.  Now my failure to continue that creative process coincided with the birth of a tiny human being, but regardless, I want to do things on my terms and not a predetermined schedule.

This year I am dreaming big.  And why not? I have only just begun writing them down, but they will be written down and visible.  And yes, some of those plans include the traditional New Year's resolutions because I am not going to lie.  I'm need to lose the baby weight from the baby that is going to have her third birthday in June.

...to be continued due to a tiny person requesting cuddles on the rocker. Now if only I could get her to turn off Barney Christmas.

Posted by Debbie at 7:18 PM No comments:

1.  It is 6:17 p.m., and I could call it a night.  I'm exhausted; hence the cup of coffee sitting in front of me.
2.  We all love Mary Poppins.  The girls watch it after bath and before books each night.  With it being Kate's newest obsession, it is also going to be the theme of her 2nd birthday party.
3.  I'd like to start an end-of-the-year countdown, but June 20th still seems like a long time.
4.  Grace and I just cleaned up the playroom, but I'm pretty sure Kate just demolished it again.
5.  Yep, Olaf just made his way next to the computer.

And now I must leave because Kate is scaling the piano - the joys of an almost two-year-old.
Posted by Debbie at 6:30 PM No comments:

My One Little Word

I stumbled upon Ali Edward's One Little Word project by accident.  Actually, I was doing my usually perusing of blogs, and something made me stop.  I'm excited for this journey; however, I'm fearful I will continue to do what I do best...procrastinate.

So...what should my one little word for 2014 be?  My gut reaction was gratitude, but that words seems to be my go to word and I'm thinking I need to push myself out of my comfort zone.  Blessed?  Positive?  Give?

UPDATE:  We'll last night some new thoughts popped up into my head.  I was dragged in a different direction for this word.   I can still bring in some of my original plans but my new word encompasses so much more of my life for the new year.......CHANGE.

Posted by Debbie at 8:24 PM No comments:

5.  Thankfully, the weather is slowly turning to fall weather.  I'm over the heat, and can't wait for more football, pumpkins, apple cider and homemade doughnuts.

4.  Sometimes all we I need is a 2-hour nap in my bed.  I still feel like crap, but at least I'm not grumpy anymore, and I can breathe through my nose.

3.  Woohoo to me.  I'm going to just say it.  I'm proud of myself.  I've continually gotten up at 5 a.m. three days a week to do Cross fit.  It's officially a habit. I love how I feel, and I love coming home to read the paper, enjoy a cup of coffee or two in the quiet of the moment.  I need this solitude more often.

2.  With Matt back coaching at the middle school, he was able to go to a Friday night high school football game with me and Grace for the first time.  And Grace did not let us down.  She showed her Daddy just how much she loves the band, "her" dancers, the Chick-fil-A cow, and concessions. 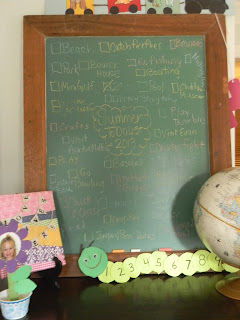 I received my "Back to School" itinerary for my in-service week in the mail today.  I guess it's official that my stint as a stay-at-home mom is soon ending. I'll get 115 hormonal seventh graders instead of my four going on thirteen year old Grace.  She makes good practice for the drama.  It also means we only have four days to tackle a few unchecked boxes on  your summer to-do list.

As a family, we have been creating these summer lists ever since Grace was a year and a half. At least now, she has quite a say in what goes on the list...hence fishing.  Sorry for the lack luster picture though, but I'll fill you in on the details.

This summer we've: chased fireflies, played in the park, jumped in a bouncy house, caught some fish (to the dismay of Grace...she was soooo excited and then utterly freaked out by the bass on the hook), took a boat ride on the Chain of Lakes, played mini golf, went to the zoo...too many times, swam in a pool (a lot...which is why we never made it the actual beach), baked Halloween and Christmas themed cut-out cookies (yes, in July), story time at the library, played barbies, made crafts, had a water fight, play, eat bbq, go bowling, play baseball, blow bubbles, have a picnic, go to Chuck E.  Cheese, smores and a bonfire, read, summer reading, travel (8 cities in Michigan, 2 in Wisconsin, 1 in North Carolina), visit the Children's Museum, hike Sleeping Bear Dunes and  tour Bronner's Christmas Wonderland.

We have four days to go to the actual beach that is literally 20 minutes away (shameful...I know), visit Puff (the white goat that Grace loves) at Bergy's, have a living room sleepover, and have a lemonade stand.

One item on Grace's list will not get accomplished - visit Evan.  We tried, but his family was on vacation when we traveled to North Carolina.  Evan was a boy in our daughter's class last year.  He moved away, and it broke Grace's heart.  On the last day of school, they had a "wedding" and got married.  We know call him "the boy who shall not be named" because if you do slip up and say his name, then she starts crying.  I really can't take the crying.

So...that was our summer.  Sadly, our summer ends in four days.  FOUR DAYS!  I do believe I will make sure to get in some extra snuggles.  Thankfully, she still snuggles with me.

Posted by Debbie at 7:02 PM No comments:

As Grace and I were driving home tonight, I noticed the flickering neon green lights on the side of the road - fireflies.  We had "catch fireflies" on our summer to do list last year, but she never did, so tonight instead of going straight in for books and bed, we grabbed her butterfly net and set off to catch fireflies.

Catching fireflies is a rite of passage.  It is a true sign of summer.

I do believe we will be doing this again, and a little fun was needed after a week that included:

1. pink eye
2.  which led to strep and an ear infection
3.  four straight days of a fever
4.  25 minutes of screaming over taking medicine
5.  said medicine spit out on the couch, on her body, in her hair.
6.  still more crying in the bathtub because of medicine
7.  20 minutes later I managed to get some of the medicine in...the next five days are going to be fun.

so...a little fun catching fireflies was much needed for all of us.
Posted by Debbie at 9:36 PM No comments:

Grateful to Be Mama

When you were born four years ago, I latched onto the song by Darius Rucker titled "It Won't Be Like This For Long".  I knew the sleepless nights would end.  Thankfully, you only made us zombies for a little over a month.  I knew the things I once cherished when you were itty-bitty would soon be gone as you grew into each stage.  I knew things would change.

As Mother's Day rolls around tomorrow, I want you to know that I love everything, every single thing about you.  I love that you still call me Mama, even when you yell for me in a creepy horror flick whisper.  I love that you still call me to get you each and every morning instead of getting out of bed yourself because then I'd know you'd saddle up to my side of the bed and probably scare the daylights out of me.  I love that you stall at bedtime.  Sometimes, for a drink, sometimes to go to the bathroom, but mostly when you call me back upstairs just to tell me you love me one more time.  I love our nightly story time that sometimes becomes the rosary.  I love how you still ask me to sing you bedtime songs.  Your favorites right now are "You are my sunshine", "Father, I Adore You", and "Refiner's Fire".  I love how you still wake me up in the middle of the night if you have to go to the bathroom.  You can do it yourself, but you told me you don't want to be alone.  I love making crafts with you.  I love your kindness, your laughter, your kisses, your snuggles, your hugs.  I love our lunch picnics in the front yard.  I love your sneaky little mind.  I love your gracisms.  I really do love everything.

And I will continue to find that things won't last like this for long, but until then I'm going to keep on waking up every morning being grateful that she hasn't completely grown up just yet.
Posted by Debbie at 5:49 PM 1 comment:

Debbie
Virginia, United States
Celebrating the joys of ordinary life - being a wife, a mother, a teacher, and the list goes on and on.